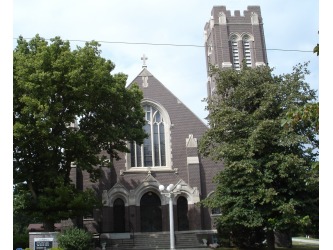 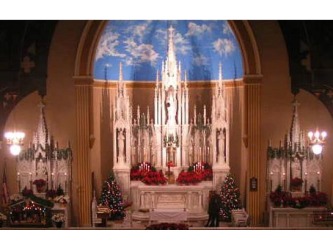 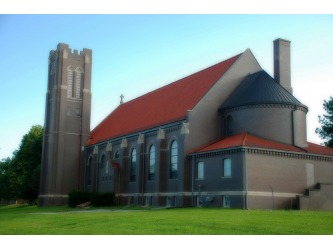 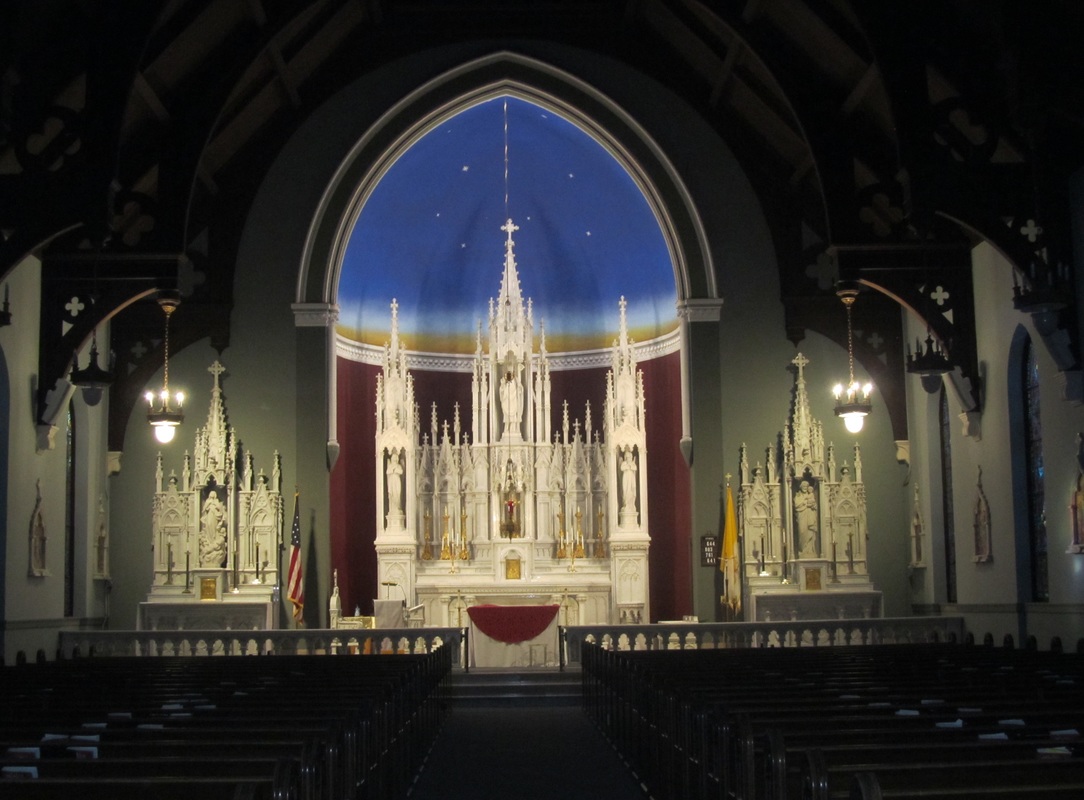 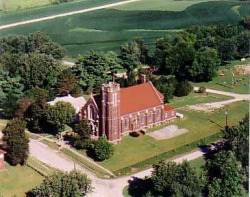 Sunday Reconciliation - 8:00am
(Sunday when there is 2nd Saturday Mass)) 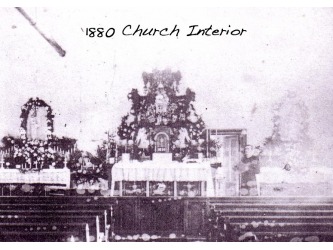 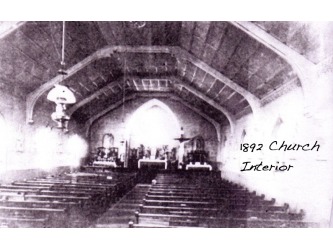 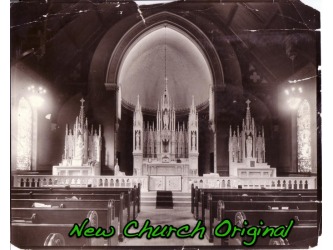 1879 - Masses were celebrated in the Monroe Center schoolhouse two miles SE of Imogene.

1880, June 21 - Father Stack organized St. Patrick parish as a mission of St. Mary Church in Shenandoah.  The parish consisted of 11 families with 120 members. A white frame church costing $1,800 was built on the SE part of the property.

1882-Father John Ryan was appointed pastor. He held the first services in the frame church.

1882, November 26 - Father Ryan began conducting services at the Catholic Church in Malvern on the fourth sabbath of every month.

1884, February 17 - Father Ryan died of pneumonia.  He had fallen into the icy Nishnabotna River  a few days earlier while on a sick call from Shenandoah to Imogene.

1892 - The original frame church was moved to the NW corner of the property and used as a hall.  It was replaced by a brick church built to seat 300.

1893 - Father Hayes had a life-sized crucifix shipped to Imogene from the Chicago World's Fair. It was placed behind the altar rail in the church.

1904, October 19 - The parish rectory was occupied for the first time.

1907 - Because of so many students, the former German Lutheran Church across from the Catholic was purchased and used for Grades 1 and 2.

1910 - The Pieta statue arrived in Imogene on June 22nd.  It was ordered as a tombstone.  The family moved to Missouri three days before the statue arrived.  Father Hayes purchased it and it sat in front of the 2nd church.

1915, August 20 - Work on the current St. Patrick Church began.  The church was built to seat 600.  When Father Hayes returned from purchasing items for the new church, he found an inferior grade of brick had been laid for the north wall.  He made the contractors remove all the inferior brick.

1916 - The altars for the church left Pietrasanta, Italy on November 1.  The ship carryng them hit a German mine in WWI action and sank.

According to one report, the roof of the church weighs 21 tons.

1918, April 1 - Installation of the stained glass windows was completed.

1918, December 2-The 2nd shipment of altar foundations arrived; the altars arrived a short time later.  The marble for the sanctuary floor came from South Carolina.

The first church organ was not electric.  There was no electricity in the church except for the lights.  The organ had two pedals for the feet to pump to make it play.  There was a wooden bar that was pulled out to be pushed with the knee to increase the volume.  It had a row of stops that were pulled out to make different musical sounds.  The organ was facing the altar.

1919 - The Catholic Parochial School was torn down.

1922-Father Hayes went on a world tour and paid for the establishment of a college in India.

1922 - A convent was built on the property formerly housing the Parochial School.

1969 - St. Patrick Academy closed in May. The CCD program began in September.

1983, July 7 - St. Patrick Church was placed on the National Register Of Historical Places.

2003, July 10 - Father Kleffman retired.  He was replaced that day by Father Ken Gross as pastor.

2005, June 16 - A two-year project to clean and repair all the stained glass windows was completed.

2007 - Restrooms were remodeled in the parish hall; a handicapped restroom was also added.

2007, December 14 - The Installation of a geo-thermal heating and cooling system was completed.

2009 - A wheelchair lift was installed in the entrance to the parish hall.

2010, January 10 - A large group of volunteers spent an hour after the 8:30am Mass removing all the pews in the church.  Refinishing of the floors began the next day.

2010, June 13 - Knights of Columbus Council 1479 (Imogene & Shenandoah) celebrated the 100th anniversary of the organization at the Elks Club in Shenandoah.  The Council was chartered on May 8, 1910 with 45 members.

2010, June 15 - Recovering of the church kneelers was completed.

2010, August 13 - The southward extension of the handicap ramp was completed.

2010, September 25 - Approximately 109 people attended the St. Patrick Academy reunion that began with Mass at 5pm followed by a 6pm supper in the church hall.

2011, May 29 - Pastor, Father Ken Gross celebrated the 40th anniversary of his ordination with a 3pm Mass at St. Mary Church in  Red Oak.  This was followed by a picnic reception.

2011, July 9 - A very large crowd attended the Farewell Mass for Father Ken Gross.  A group picture was taken on the front steps after Mass and then all proceeded to the west side of the Faith Center where Father Ken blessed a Crimson King Maple planted in his honor.  A reception followed in the hall.  Grilled hot dogs, hamburgers and chicken was provided; parishioners donated salads and desserts.  The meal was followed by a sing-a-long that included various Irish songs and Father's requested song-Roll out the Barrel.  Father and Therese Sunderman lead the sing-a-long.  George McGargill played the RAGBRAI song.  Morgan McGargill, first child baptized by Father Ken as our pastor, presented him with a book of pictures submitted by the congregation.


2012, November - The Centennial Building Campaign to raise $400,000 began.  The money raised will be used for many needed repairs prior to the church building becoming 100 years old in 2015.

2013, October 12 - Father Tom celebrated his Silver Jubilee with a 4pm Mass. Bishop Richard Pates, three priests of the Franciscan Order, TOR and over 250 people attended the Mass.  It was followed by a catered dinner in the church hall.


2013, November 11-December 13-Father Tom was away from the parish attending three jubilee celebrations in his native India.

2015, July 11 - The centennial of the third church building was celebrated with a 4pm Mass followed by a dinner for 800, Irish music & dancers and fireworks.