The city of Imogene incorporates the usual Mayor / Council form of government.  With the population less than 100, a three (3) seat Council is used.  Both the Mayor and Council members are elected for a two (2) year term by the public.  The City Clerk / Treasurer is appointed by the Mayor and the Council.  The current positions are as follows:

For information or if you have any questions, please contact
Mayor Morrison at 712-386-2175.

The City of Imogene functions on a budget of $20,000 a year which is less than what most households have.  With the slow decline in population over the years, the tax base has also declined, thus the city income declines.  However, expenses remain the same and / or increase at the same time.

Fundraisers are held at different times to help offset expenses becoming more than the income.  The fundraisers are a joint effort between the citizens of Imogene and the surrounding community.  Thanks to the efforts of the
Sons & Daughters of Imogene (community betterment organization), the parishioners of St. Patrick Catholic Church, the Emerald Isle, Imogene Ag, the Imogene Softball Complex participants and the Wabash Trace Nature Trail users, our town is experiencing a renewed feeling of hope for more good things to come.

It is with their generosity that "Little Ireland" (which is what this area was known as before becoming incorporated) will continue to remain incorporated now and in the future. 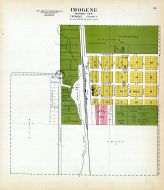